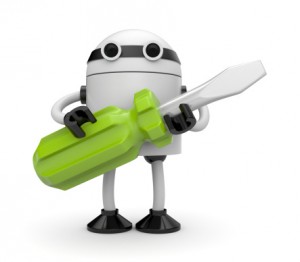 The original concept designs for the mascot of the popular Android mobile operating system have been revealed by Google executive Dan Morrill. Morrill posted an update on Google Plus about the mascot’s history last week, alongside anecdotes and backstories about the development history of the popular phone software.

The original designs for the iconic robot come in a variety of colours and are illustrated in a decidedly more child-like way, with brightly coloured eyes and large waving arms. First drawn up in 2007 for an internal developer launch, they had a moment of popularity among the staff, who nicknamed them “Dandroids”, but ultimately they were shelved in favour of Irina Blok’s design for the now instantly recognisable Android logo, the “Bugdroid”. You can see all of the Dandroids here.

In a comment on his post, Morrill also noted that the original intention had been to name a series of mascots after popular robots in film and media – however, this had proved too difficult, as many were trademarked. Displaying the pictures on his Google Plus page, he commented: “I figured I’d share them so you can experience a thrill of terror at what might have been, and thank your local patron deity for Irina’s incredible home run.”