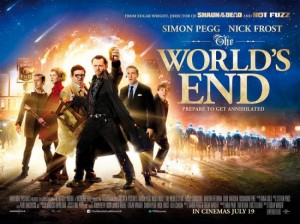 The third instalment of the long-awaited so-called “Three Flavours Cornetto trilogy” of Edgar Wright films is soon to hit British cinemas, and the director has gladly shared his artwork to get the public excited about his latest project.

The World’s End, which features British comedy duo Simon Pegg and Nick Frost – and completes a trio of films preceded by 2004’s Shaun of the Dead and 2007’s Hot Fuzz – chronicles the attempts of a group of friends to follow up on an epic pub crawl that took place 20 years previously. Led by teenager-at-heart Gary King (Pegg), they attempt to reach the titular fabled pub, though the real problem with that is “not just theirs, but humankind’s”.

The threat to their night out – and indeed their livelihoods – is demonstrated on the poster in the form of seemingly-possessed locals with shining blue eyes, who crowd around Pegg and Frost, as well as long-time collaborators Martin Freeman, Paddy Considine, Eddie Marsan and Rosamund Pike. Whether or not the film is taking a stab at alien invasion with its robotic inhabitants, it certainly looks like it will blend British humour with a darker story.